Associate membership is  open to osteopathic and allopathic physicians whose professional activities involve cooperation with family physicians through their specialty or who contribute to some phase of the specialty field of family medicine.  Call the Ohio ACOFP office for membership information.

For six years in a row, the Ohio Chapter was honored by the American College of Osteopathic Family Physicians for outstanding achievements as a state chapter.  Ohio ACOFP received the following awards, until the award recognition program was discontinued in 2012: 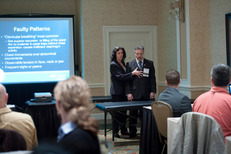 Poster Contest and Lectures during the annual   Ohio Osteopathic Symposium.

Members receive reduced registration for Ohio ACOFP-sponsored educational seminars, representation before state boards and commissions, advocacy for issues that affect family practice, networking, recognition programs, and a subscription to News and Views.  Click here for a sample News and Views 2012.